UPDATE: 7/17/06 (posted 10/16/06 - WAY behind here)
I had a blast celebrating Independence Day in the People's Republic of Lost Angeles <VBG>.
Told everyone I was there courtesy of LAPD, who likes to pick on grandmas.
Court date for the 1st amendment ticket was July 3rd.
Of course, the  judge threw it out.
Cruised Calabasas in the afternoon to celebrate that.
Then I decorated the Liberty Van with 3 great big shiny red white & blue bows on the hood, plus strings of r/w/b stars all around, and blue bunting with red and white stars around the front, and celebrated July 4th by putting 200+ miles on it ALL OVER LA.  Did Hollywood (where I got the ticket) and Sunset Strip 3 times - morning, afternoon, and again at 1 am for a night cap.  Drove it all the way down Wilshire Blvd, all the way back up Santa Monica Blvd, and cruied Rodeo Drive.  Then I ran ALL the beaches from Santa Monica all the way around to San Pedro.  Went up to Sacramento again for my birthday (July 6, 55 yrs old - get my 10 cent senior discount at Dairy Queen now : ), then did San Francisco again, and San Diego on my way home (after one last cruise through Hollywood, Sunset Strip, and downtown LA).  I have pictures of the van from this trip, but so busy, not sure when I'll get them up.  Bookmark this page and check back from time to time, or email and ask to be on my list to be notified when I update the smoker's rights info on my sites.
Posted June 28, 2006

The note the officer wrote on there says,
'Driving too slow as to impede flow of traffic, 3 cars honking at her advertising smoking'

On May 19, I went to LA Court (on Hill St) to plead innocent, and get a court date.
The judge chuckled when she read the ticket aloud in court.

I told her, 'Not guilty - this is not about my driving.  It's about my
creative expression of my first amendment rights."  I also held up some
photos of my van.  These same photos are on my website at


http://www.aalf.ws/smokers-rights-van/liberty-3-3-06.html
She replied that 1st amendment rights are also important to her, and set a court
date for me of July 3, 2006.  I told her I intend to be in court - 'with bells on'.
She released me on my own recognizance.

I put about 4,000 miles on the Liberty Van in CA alone, during two seperate
trips in April and May, 2006.  I was there because my dad was very ill, then he passed
away.  In between visits to my dad in the hospital, I drove around a lot.  He was
pretty out of it most of the time, and there really wasn't much I could do for him. I
think it therapeutic for me to have something to do.

I have not had a single point against my license in more than 25 years.  For the past 12 years,
Ive been retired, and driving about 30,000-40,000 miles per year to visit widely scattered family,
and show our Afghan Hound dogs.  You can see my dogs here: www.hosanna1.com/Hounds/
I have now traveled more than 15,000 miles since I started this 1st amendment project.

Pictures of this van and some of my travels with it are here:

HELP Get the Word OUT - VISIT OUR FREE GRAPHICS PAGE

Notice, though I am addressing smokers, I am not advertising smoking, as is stated on the ticket.  I have never had any
connections with any tobacco companies, nor am I a salesperson.  Ive been a full time homemaker for past 18 years, and
still have 4 kids at home.   Before that I was a computer programmer at IBM. www.hosanna1.com/myresume.html
Ive never heard that IBM had any secret connections to the tobacco industry <G>.
I am advocating freedom and private property rights.  I am nothing more than a (fairly well educated) grandma from Kentucky.
So far in my travels, most police have completely ignored the Liberty Van, some are smiling,
some are waving, and a few are giving me thumbs UP.  I am certain that if I had not been driving in an
extremely reasonable manner at all times, I would surely have a whole pile of tickets by now,
as my van is very conspicuous. This ticket represents the FIRST time Ive been stopped by
any cops since starting this project (about 15,000 miles now).  [Since then, I was stopped just ONE other time.  [That was in May,
when I'd come back to clear out my dad's home because it was sold.  I had to pick my 30 year old son up at the Long Beach airport.
He'd flown in to help.  The cops pulled me over as I entered the airport.  They checked out my license - as usual, I had that, + insurance
+ registration + seat belt on.  I WAS DOING NOTHING ILLEGAL.  They expressed concern about my ability to see out the windows.
I replied that it's a van - I usually can't see out those windows when I have it loaded.  That's why I have mirrors on both sides.
I told him I'm creatively expressing my first ammendment rights, and offered to take down my curtains.  He asked me what I was doing there,
and I explained I had to pick up my son who had flown in from Florida to help me with my dad's estate.  They asked me where he was,
and I said, I haven't seen him yet. Maybe he saw this, and decided he'd rather walk?? That seemed to satisfy them, so they let me go.
They did not 'help' create a reason to give me a phony ticket, as the cops in Hollywood did.  THERE IS NO LAW ANYWHERE IN THE USA
AGAINST HAVING WRITING ON YOUR VEHICLE]

Where & How This Ticket was Issued

This happened on a road with 6 lanes - two in each direction, plus parking (allowed only during business hours)/traffic/turn lanes
on both sides.  The officer tried to tell me it was only a 2 lane road, but I'm hard to fool.  In Kentucky, we have lots of 2 lane roads,
and I'll bet I could fit about 3 of them right down THIS part of Hollywood Blvd. <G>  Traffic was light as it was a Tuesday night.
I immediately got out and took pictures of the 6 empty lanes, and my mini-van, including the street signs,
and the 25mph max speed sign.  I was doing about 20 in the right-hand traffic lane.  Even if I could have turned this
mini-van sideways, there is no possible physical way for me to have blocked all those lanes with it.
In fact, I did notice when cars stopped coming by me in the left lane, and glanced in my mirror, and saw bubble gum jars.
This (or another?) cop car was matching my speed, and staying right by my left rear fender,
preventing traffic from passing us. IF anyone was blowing a horn, I did not hear it, as I was playing a CD.
However, IF anyone blew a horn, they must have been far enough back not to see the cop, as most folks arent going to
blow their horn at a cop.   Since my van has a low profile, I am sure if folks couldnt see the bubble gum

jars, they would not have been able to see my van, either.  One person lightly tapped their horn as they went by me,

(when the cop finally got out of the way, because I took my foot off the gas and
slowed down, and he finally went around me) and they were waving thumbs up out their window.
My van was getting many thumbs up, also cheers and applause at times.  Since this was on Hollywood Blvd,
just a few blocks up the street there were folks dressed up like space aliens, and other weird things.
Gruman's Chinese Theatre was several more blocks up the street.

Here are the photos I took when the cop was there:

I think the comments the officer made on the ticket make it clear my message, not my driving was his issue.

There were many people speeding, also much traffic was impeded farther up the Blvd by those trying to get into parking areas.

I wonder how many tickets they wrote for others who were impeding traffic?

How many speeding tickets did these officers write that evening?

In Los Angeles, 40% of murders and 80% of sexual assaults go unsolved.
I read that in the paper while I was out there.  Of course, they want more tax money for the police.
Two officers wasted about ½ an hour giving me this ticket for driving TOO SLOW in a 25 MPH zone.
If I was a citizen of the People's Republic of Los Angeles, I would be OUTRAGED.

I wonder if it was the same officer who wrote the 82 year old lady a jaywalking ticket because she couldnt get all the way across 6 lanes in the 27 seconds the light allowed (all over the world news a week or so ago before this)???

(from a letter I wrote to my attorney)

This is a very important matter to me.

Can I sue them for harassment, or violating my constitutional rights?

Thank you for your attention and assistance.

I'm pretty sure this cop would have written me up for a scratch on a tail light if he could have.  This was the best he could do - and he
(or one of his collegues) actually prevented traffic from going around me himself.  Geesh.
So, good news is we seem to still have some First Amendment rights in most of this country,
except in the People's Republic of Hollywood.  I cruised Hollywood Blvd and the Sunset Strip
at least a 1/2 dozen more times after this (with NO problems, and not doing ANYTHING different).
Any help would be appreciated - legal, moral, etc.  I am going to court with this.  I politely thanked the officers,
and told them I will be there 'with bells on'.  Plus I get to park my van by the courthouse : ).

On May 19, I went to LA Court (on Hill St) to plead innocent, and get a court date.
The judge chuckled when she read this ticket aloud in court.  I told her, 'Not guilty - this is not about my driving.  It's about my creative expression of my first amendment rights."  I also held up some photos of my van.  These same photos are on my website at

http://www.aalf.ws/smokers-rights-van/liberty-3-3-06.html  She replied that 1st amendment rights are also important to her, and
set a court date for me of July 3, 2006, at 1:00.  I told her there is NO WAY I'll miss it.
She released me on my own recognizance.

For those who may be interested in first amendment rights,

Superior Court of the (People's Republic*) of California,

My attorney is Mark L. Tseselsky, Esq. of

PS: Please accept my apology for how ugly this page is. I need to leave for Los Angeles
tomorrow, and just have too much to do, and no time to make this prettier.

EMAIL - Here is MY Opinion 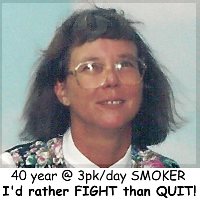